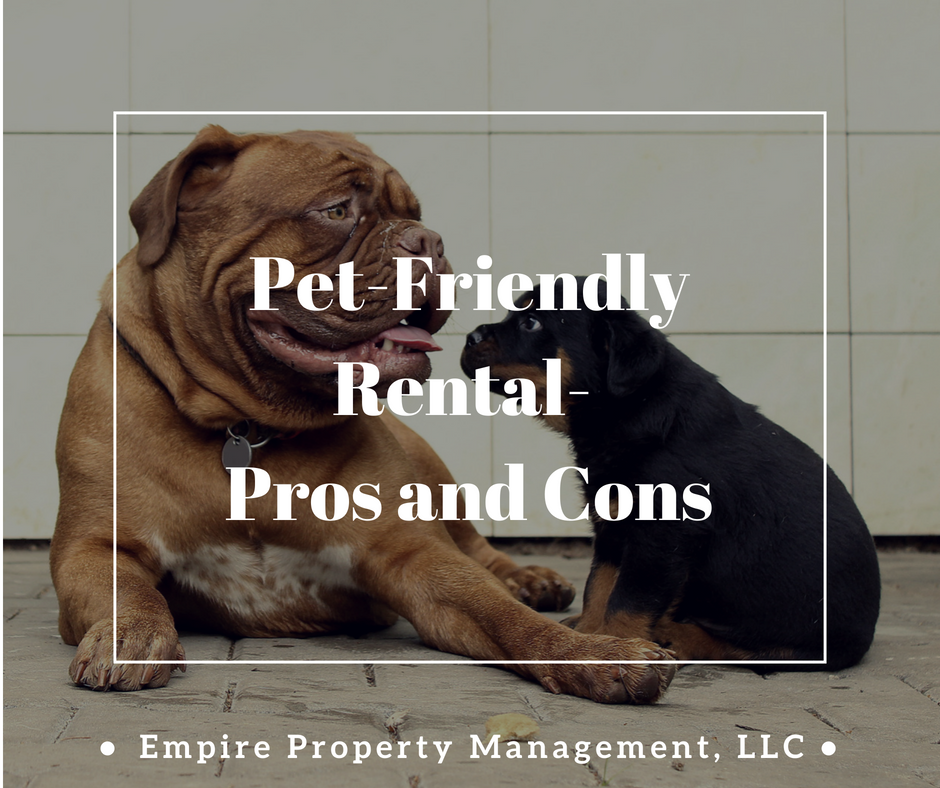 The most common question asked by prospective applicants is “is this home pet-friendly?” For many, that is the deciding factor. Many animals are now viewed as family members. Leaving them behind is unthinkable.

It is important to remember that “Pets” and “Assistance Animals” are not the same thing. A pet is, well, a pet. An assistance animal is there for support. In the eyes of the law, it is not an animal, but more of a wheelchair. Treating an assistance animal as a pet is a foolproof way for a landlord to find themselves in court.

Drawbacks to the Pet-Friendly Rental

While the pros are quite substantial, so are the cons. Nobody has anything against the pet owners, but sometimes, most of the time, the pets themselves have a knack for making trouble. Landlords and Property Manager can be opening the door for a little extra trouble when they decide to allow pets. A few of the cons are:

Bonuses to having a Pet-Friendly Rental

68% of households in the United States own pets. That is over half of the rental market. By excluding those with pets, you severely limit the size of your audience. Also, most pet owners have a very limited selection of homes to choose from. They find moving difficult because of that lack of inventory. Hence, there is a slightly higher chance of enjoying a lower vacancy rate.

Also, despite the many horror stories told regarding the vicious dog eating the neighbor’s kid, most pets are well behaved and of the ones that aren’t, the majority are not violent.

Allowing a family with a pet is a reasonable risk in most case. Being a landlord is about knowing when to take a reasonable risk. If you are considering allowing pets, there are certain steps that can be taken to alleviate that risk.

As our founder and lead Property Manager began managing on his own properties, he was at liberty to take chances. We made mistakes, and we learned hard lessons, but the end result was a pet policy perfected over many years of trial and error.

The cost to keep an Allowed Pet includes:

As nothing is perfect, there are both drawbacks and bonuses to allowing pets within your rental. Which trumps the other? It is hard to say. It can vary largely by home. Contact Empire if you wish to discuss your current pet policy.